What Does Facebook’s Complete Redesign Mean to Your Real Estate Business? 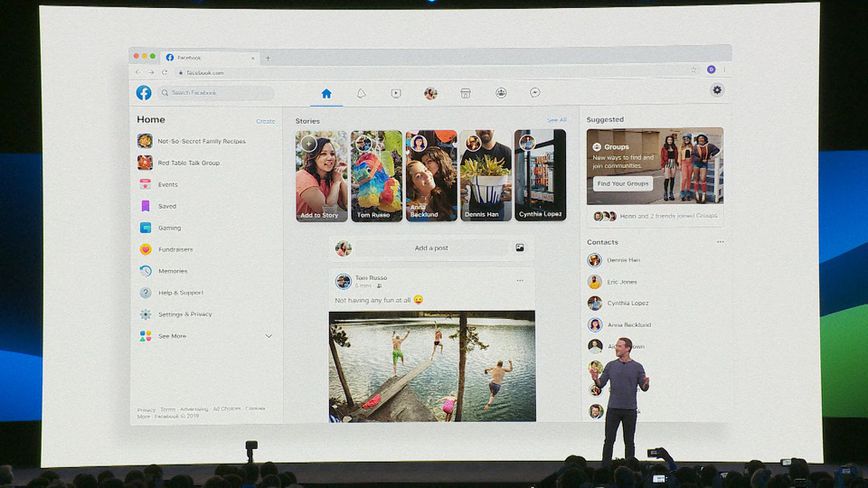 Is your real estate business on FacebooK? Well, on April 30th, at Facebook’s annual developer conference (F8) in Silicon Valley, the social media giant announced it will be getting a complete redesign, the big blue dashboard and interface will look a lot more sleek and modern. “Stories” will be center stage along with “Groups” too. This is a clear indication that Facebook wants to rebrand itself and remove all negative connotations associated with it. These troubles string back about 2 years ago, to The Cambridge Analytica scandal, were the misused personal data of Facebook users was discovered. Although, for the most part, this changed the way many users interacted with Facebook, it seems Facebook is steadying recovering from the mishap.

So, you might be asking yourself, what does this overhaul mean for your real estate business on Facebook? One thing that is important to note is that this redesign is happening because Facebook claims it’s trying to change its ways and focus on user privacy and security. Aside from the obvious cosmetic changes coming to its platform, we can also expect algorithm changes as well as new and improved private policies.  Facebook chief executive Mark Zuckerberg is just only starting to craft answers for what the future will look like for the social media giant, which also owns Instagram, WhatsApp, and Messenger.

Over the years we’ve seen Facebook implement a lot of changes and restrictions on real estate businesses within Facebook Ads especially on targeting to specific demographics. Now the question is, will this redesign effect real estate specific targeting ad demographics even more? Since they’ve done it in the past, it’s safe to say they can do it again!

Here’s something you might not know; ninety-nine percent of Facebook’s revenue comes from targeted advertising, from profiles that are tied to the information people collects about people, including what they post publicly on Facebook. If they keep limiting how specific real estate agents can get and who exactly they want to target people will look for other advertising platforms that allow them to target who they want.

Market Your Real Estate Business on Facebook with This New Redesign

Now that we understand what changes are coming to Facebook and how it will affect our real estate marketing strategies, let’s talk about what we can do to still be successful with our marketing dollars.

In the past, Facebook has created a pattern when they launch or shift their focus to new features on its platform.

For example, when Facebook launched “Facebook LIVE” they urged everyone to stream live videos because it would help them gain more exposure and engagement. Likewise, when they changed their news feed algorithm they urged all businesses to begin creating and posting more native content and building a strong organic following. This made it a bit harder for real estate businesses that were relying solely on paid ads or boosted posts for traffic. Fast forward to today, and now we see they’re doubling down on Facebook stories and Facebook groups. So what does that mean? It means you should probably start to look for a place in your online real estate marketing plan for Stories and Groups! If Facebook is shifting its focus, so should you.

Zuckerberg reflected what has long been a truism about the Internet: “Wherever people’s eyeballs go, dollars will follow.”

There were other cool and interesting features that were announced, like minor changes coming to Instagram, the Facebook “Portal” device and a brand new virtual reality Oculus headset. In this post, I chose to specifically talk about changes that would affect your real estate business on Facebook.

I hope you were able to get some valuable information out of this article! Please feel free to check out my Agent Tools page where I have compiled resources and recommendations for real estate agents like you who are ready to take their real estate marketing one step further. I began real estate at the age of 18, like many agents, this was not my first career choice. At 18, the world was still very new to me and the real estate industry even more so. I realized that in order to be successful in this industry you must surround yourself with the right people. I was blessed to have great mentors but I found a common problem among myself and my peers. The lack to lead generation skills. It is for that reason that I have decided to build this community and share my knowledge with the world.

How to Increase Your ROI for Real Estate Marketing in 2022

A Guide to the Role of a Real Estate Marketing Coach, Explained

Get the coolest tips and tricks today

These 5 top strategies have been tested and proven to increase organic traffic and build your Facebook following 3x quicker.